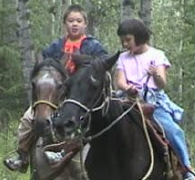 A Horse Riding Tale from Childhood

Why couldn’t the pony sing? Because he was a little hoarse!


For some people, riding a horse is one of the most relaxing and enjoyable experiences ever.  For people growing up in big towns or inner cities, access to horses and horse riding facilities can pose a big problem.

Horses need a lot of space to run, walk and graze and to be housed in stables, therefore it is mainly more rural areas or the suburbs where horse riding is available, unless of course you are lucky enough to own and keep your own horse or horses.

Hay! I know a bit about horse riding, you know?
Come on then. Giddy up and tell us.
Well Step One: Mount the horse and Step Two: Stay Mounted.

For people like me who grew up in the countryside, horse riding is a common pastime and mode of transport. My dad owns a ranch where he kept more than 20 horses and as I grew up, horse riding became a large part of my childhood; indeed, I learnt how to ride a horse at a very early age.

It was always great fun to go deep into the woods exploring on the back of my favorite horse, who was named Kemp and I really loved. Kemp was a magnificent stallion, very loving and incredibly obedient.

One summer, my uncle came over for a visit with his wife and their daughter who was a bit younger than me.  It was a two day visit and because they lived in the city, they wanted their daughter, my cousin, to fully experience life in the countryside.

A day after they arrived, I was given the rather large responsibility of teaching her how to ride a horse with clear instructions that we were not to go far and that I take very good care of my cousin.

Oh great. I sense a good story coming on.
It’s about riding which is the art of keeping the horse between you and the ground.

I spent the morning coaching my young cousin and by the afternoon, she seemed good for a little ride.  As clearly instructed, we were supposed to ride slowly and only within the neighborhood.

After lunch, we left. I rode on Kemp while she rode a younger stallion. We just did some rounds in the neighborhood and I showed her some basic riding techniques such as the correct position to sit on a horse and how to guide him left and right and  stop.  My cousin was a quick learner  and she was so happy about it.

Excited about everything, she requested that we try riding the horses faster.  The best part of myself wanted to object to this, but swept along by her boundless enthusiasm and not wanting to disappoint her, I eventually agreed.

Nothing wrong with a little trot.
Are you hot to trot?
Enough Hector! you can trot on.

I told her to keep up with my pace as we rode towards the woods with the intention of only visiting familiar places where I knew we would be safe together. After riding for about an hour, my cousin was keeping up well and even had a little canter.   Pleased with myself and how it had all gone, I decided that we head back home.

Pride comes before a fall, as they say, and I don’t know what made me think that she had enough experience, or that it would be a good idea but I challenged her to race me.   I think that I just wanted to end the hack on a high. This, as it turned out was a grave mistake.

We started racing but we had not gone far when I realised that my young cousin was struggling.  I slowed up and let her young horse take the lead so that I could bring the race to a stop and she could be proud of winning.

As I watched my cousin up in front,  she was a vision of speed and grace for such a novice and I slowly smiled. However, at that very moment something went really wrong.   I guess that she must have applied too much pressure on the stallion because suddenly he abruptly stopped and bucked her right off, throwing her to the ground … hard.

I immediately stopped and went to her aid where she was screaming on the ground. She had badly injured  her arm. I felt a little relief because she had been able to let go of the lead rope, otherwise she could have sustained much worse injuries.

I mounted my cousin beside me on my horse, saddened and worried I led us all home.  One trip to the hospital and one broken arm later we all gathered together over a late dinner.  My parents were disappointed in me when I explained what had happened. I felt so guilty about the whole idea of racing.

However, no permanent damage was done and my cousin made a quick recovery and was back in the saddle the very next day, cast and all.  She is now a fine and experienced horse rider.

The moral of the story

Always learn to walk before you run … or canter, or gallop

Hold on to what makes you happy, if it tries to buck you off just hold on even tighter.